Read article in the on New York Cottages & Gardens website.

Leslie’s work as art consultant was featured in a home tour in March 2019 edition of New York Cottages & Gardens magazine. The article was written by Alyssa Bird with photos by Alexandra Rowley.

Imagine a place created by successful women in celebration of other successful women. That’s precisely what designer Rena Cherny, art advisor Leslie Gerber-Seid, and private equity investor Amanda Parness have achieved at the latter’s pied-à-terre near Union Square. Parness, who works in Manhattan and spends most of her time in Englewood, New Jersey, with her husband and three teenage sons, wanted a “girl’s pad” close to her office that would accommodate her demanding schedule and occasional overnight stay. “I’ve always wanted to live in the city, and I was tired of battling the traffic every day,” she says. “It just makes my life a little easier.”

But the apartment—an 1,800-square-foot loftlike floor in a mixed-use building from 1910—is a far cry from what might be commonly perceived as a girl’s pad. Parness, who describes herself as “not particularly girly in terms of my demeanor,” called upon Cherny to envision a modern and glamorous, “but not flashy” space where she could display her collection of works by undervalued women artists. “In my field, women are underrepresented, just as many mid-career female artists are. I wanted to make a statement about that.”

Parness’s passion for buying art took hold of her about six years ago, when she decided that, having worked in finance for more than two decades, she “needed a right-brained hobby as a way to relax. I tried salsa first, but quickly moved on to the free gallery tours on Thursday nights in Chelsea. I caught the art bug and knew that I should be more educated if I was going to go beyond my comfort zone in terms of budget.” Enter Leslie Gerber-Seid, an art advisor who owns a gallery on the Upper East Side. “Amanda has great taste and allows herself to take risks,” says Gerber-Seid, who has accompanied Parness to art fairs in New York and Miami. “This project wasn’t just about filling wall space, but rather what speaks to her. As a smart businesswoman, Amanda knows what it’s like to fight your way through the world, and I think that’s a very timely topic right now.” (A recent acquisition of Parness’s: a neon work by Deborah Kass featuring the words “enough already” in bold script.)

Because the artwork—by such other talents as Marilyn Minter, Katherine Bradford, Tara Donovan, Louise Bourgeois, and Tracey Emin—is the primary focus, Cherny was tasked with creating an environment that would allow it to shine. The decorator opted for a mostly neutral palette with touches of blue and a scrupulously curated array of striking minimalist furnishings. “Blue pops against the white floors and brings out the orange in the original brick wall,” explains Cherny, who worked closely with Parness to establish continuity in both the public areas and private spaces, which are separated by a simple frosted-glass partition wall—not unlike circa-1970s artist’s lofts in formerly boho SoHo. But times have changed. “I did host a salon-style art show in the apartment one night,” Parness says, “although I don’t normally entertain. This space is really just for me.” 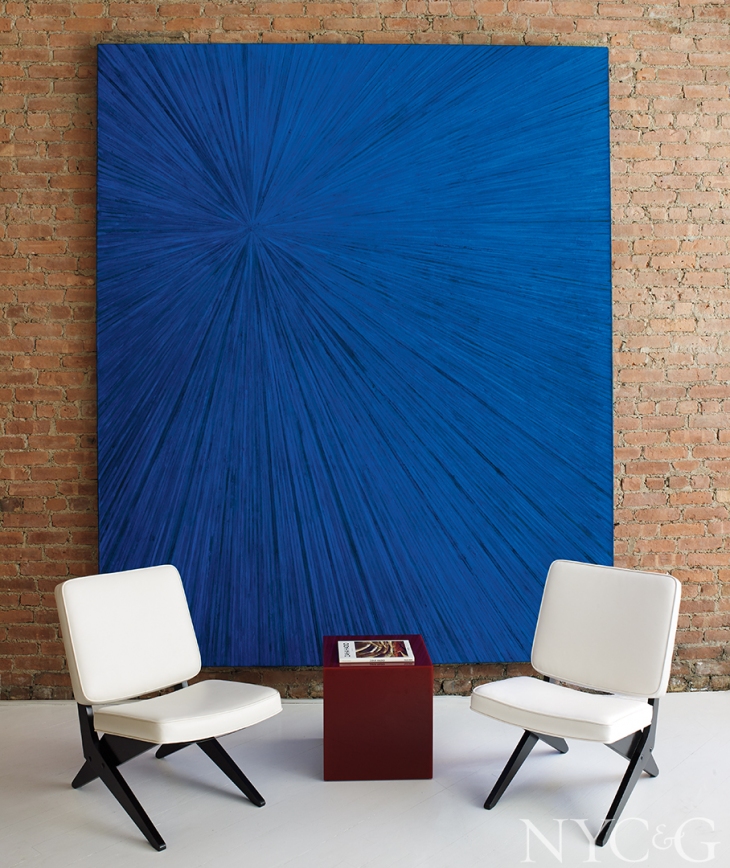 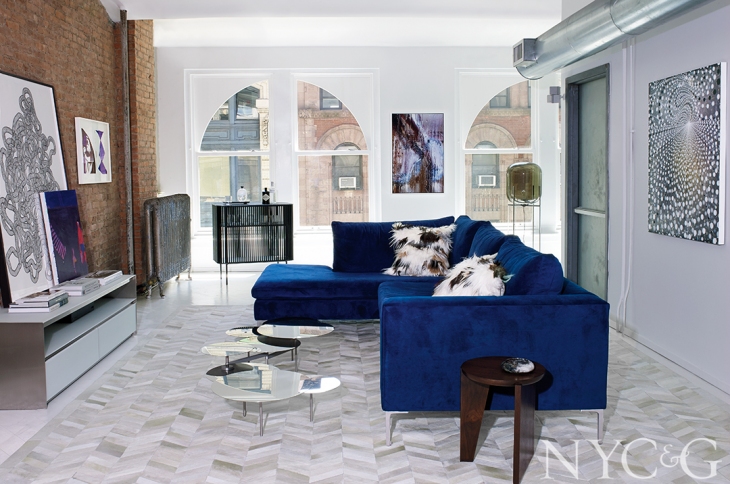 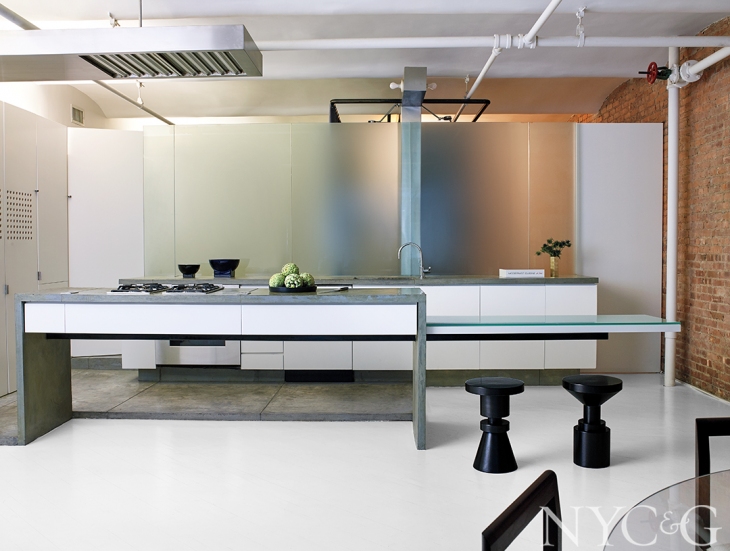 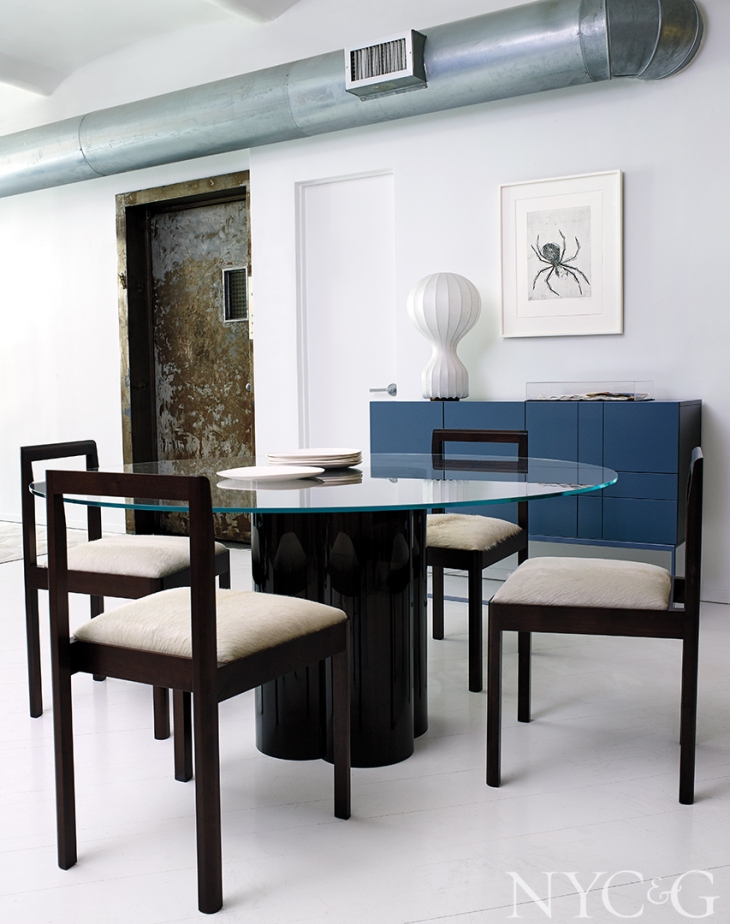 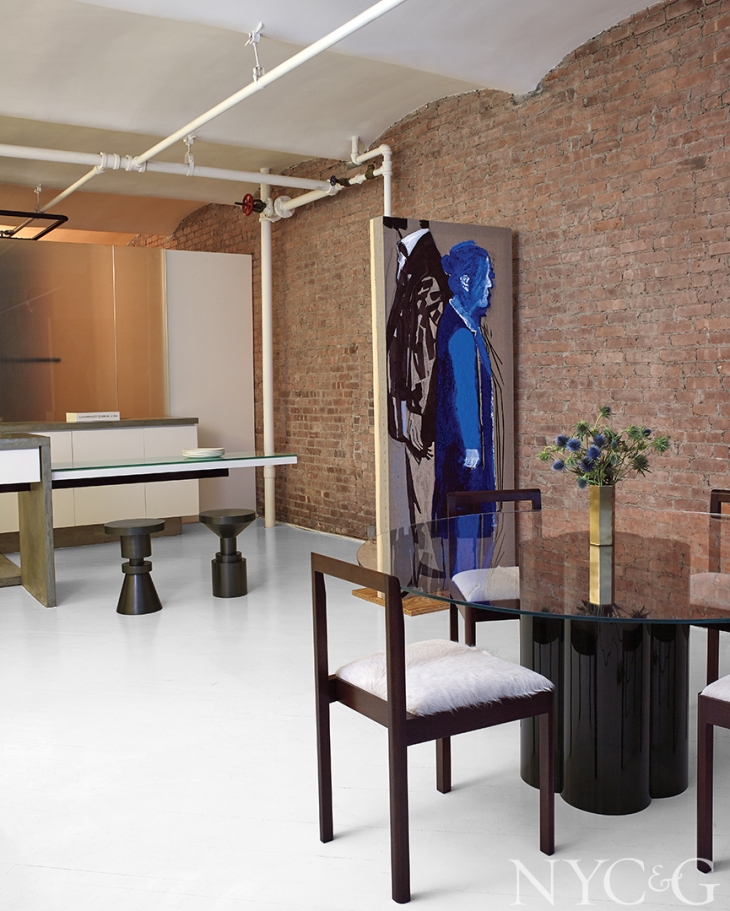 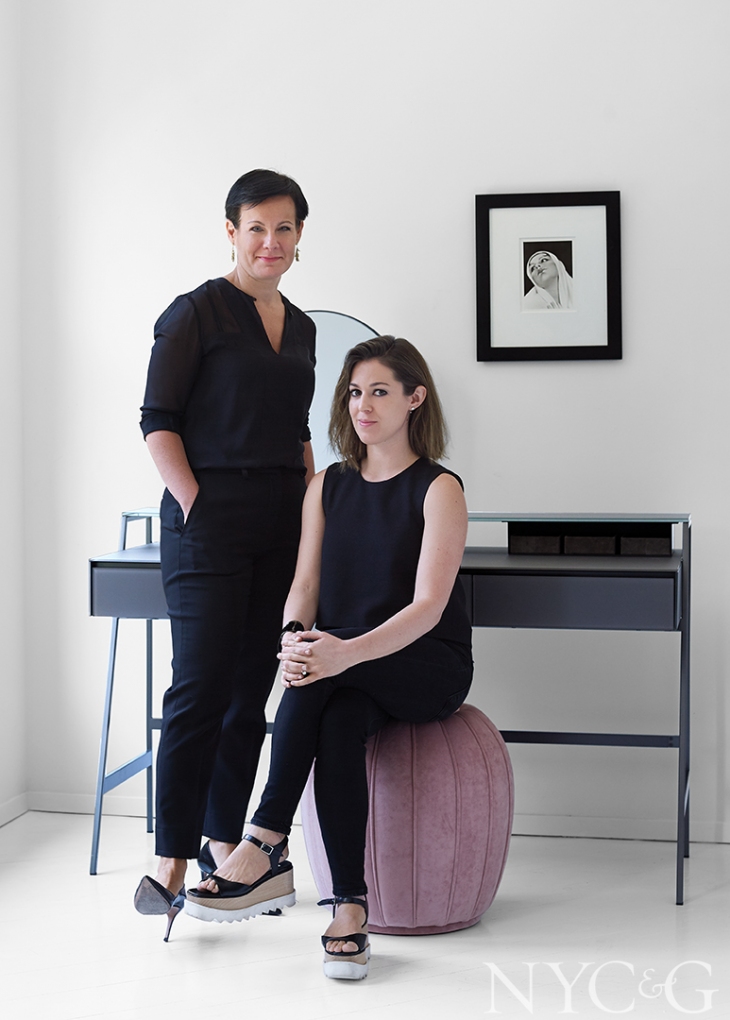 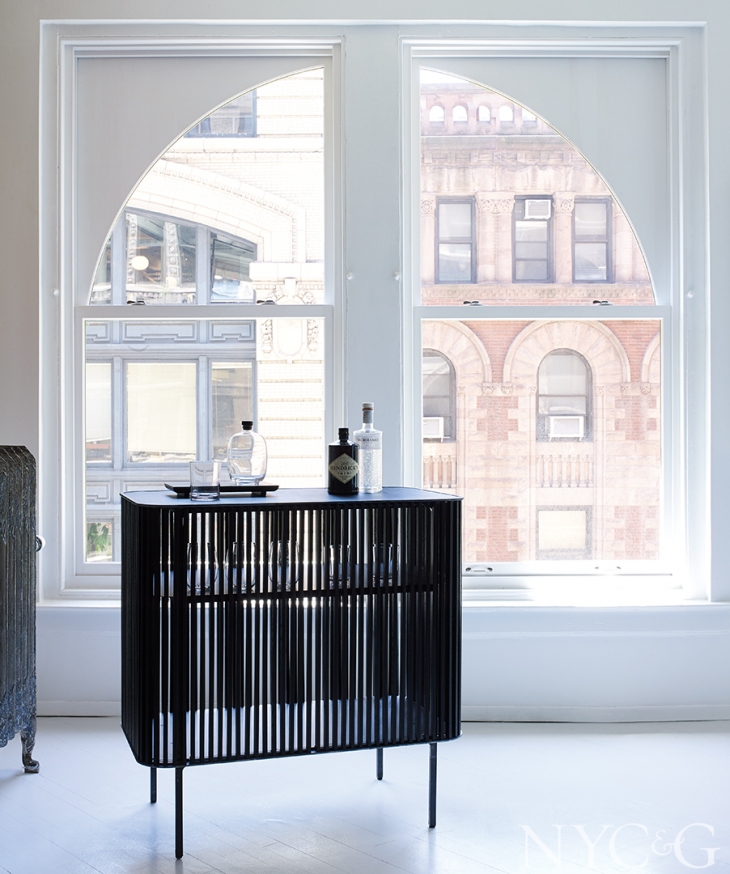 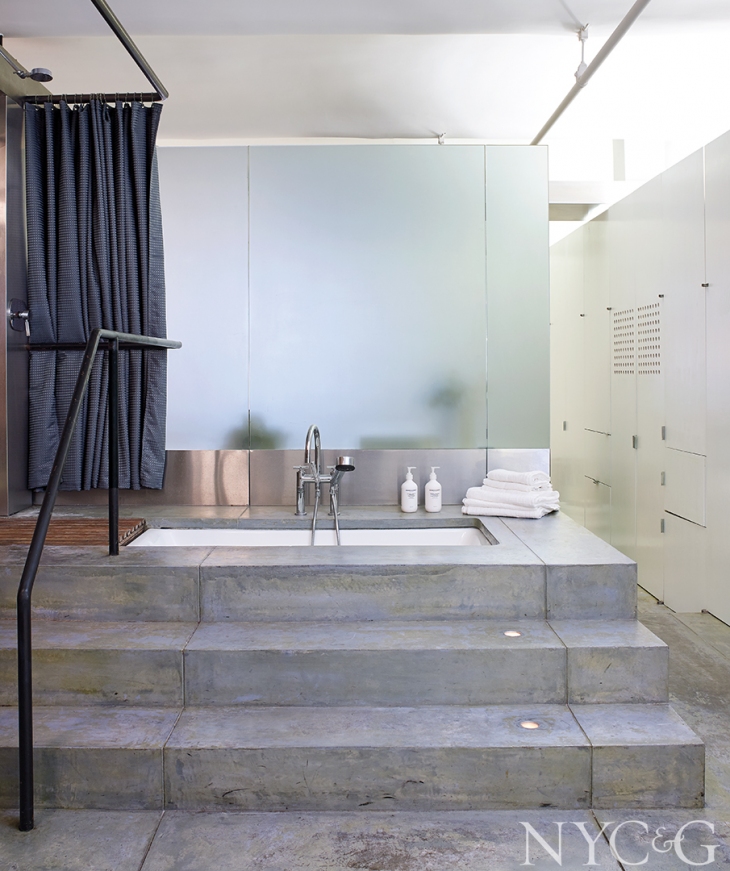 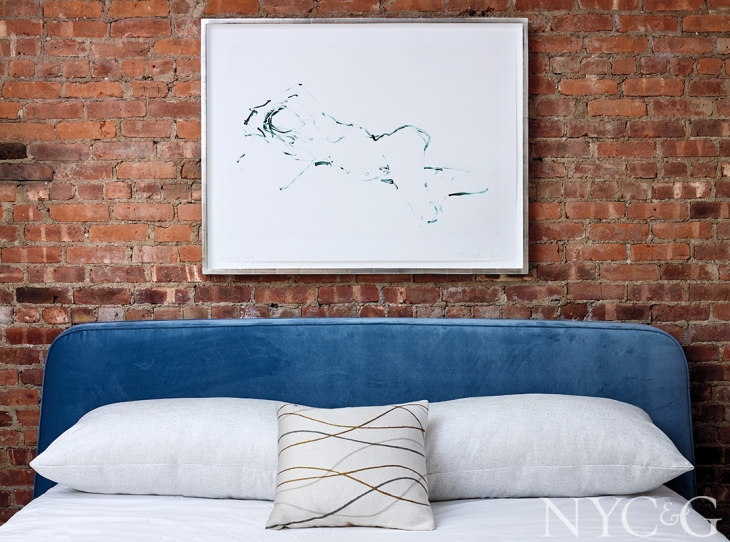 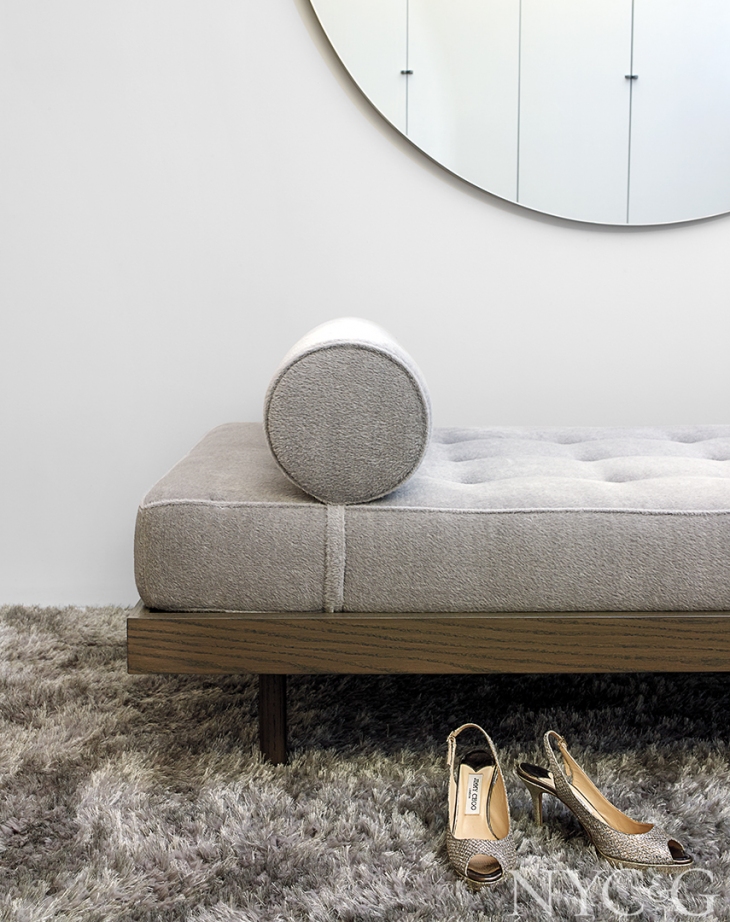